I think it is important not to fix its meaning for others.

What could have happened before the recording? What happened afterwards?

I’m not particularly eager to reveal my interpretation of what led up to the moment the image was captured. I think it is important not to fix its meaning for others. I prefer to leave this up to each viewer and their imagination. One of the reasons I love Street View photography is that we are forced to project our own interpretations onto the images; each individual will develop their understanding and imagined narrative since the photographs are ripped out of any context other than geographic location and spatial contiguity. On one level, the Street View image can be seen as a neutral representation of reality that is not manipulated by any human photographer; thus, the Google camera can perform an act of true documentary photography, recording fragments of life without any cultural or aesthetic intentions. Google has created the greatest photographic archive in history to add an extra feature to Google Maps. But in doing so, Google has achieved  what the culture theorist Siegfried Kracauer viewed photography’s mission: to represent significant aspects of physical reality without trying to overwhelm that reality so that the raw material focused upon is both left intact and made transparent. 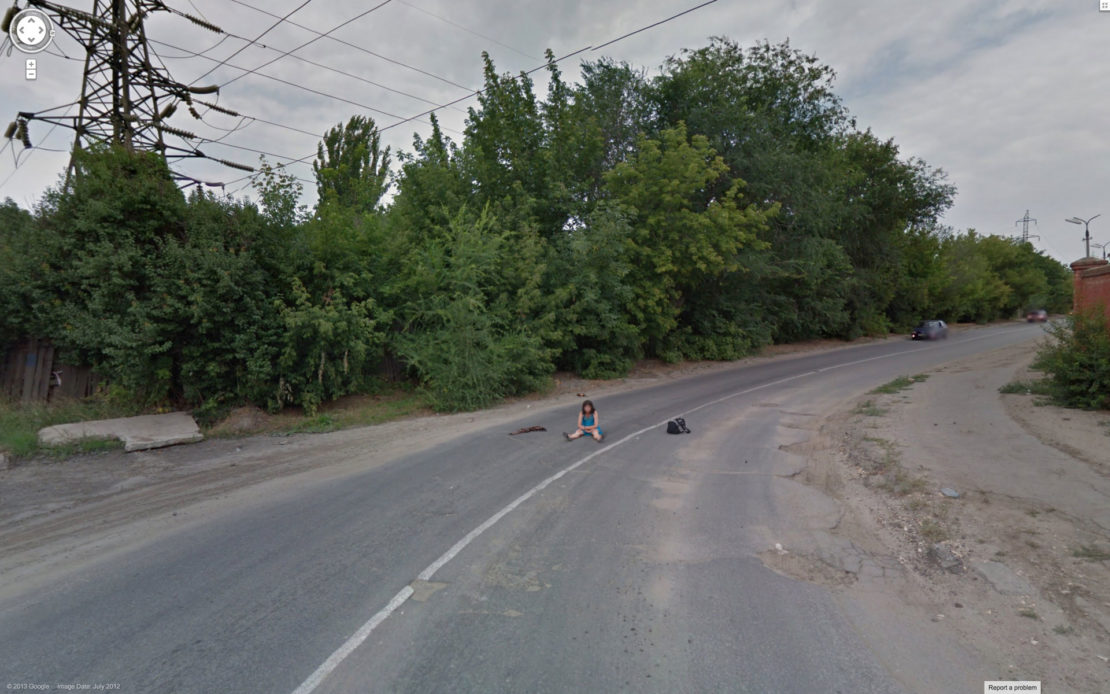 Does Google fulfill this mission of photography? What task does the viewer take on?

The power of the image comes from what we bring to it. I would like to point out that this detached gaze of the automated Google camera can lead to a sense that we are observed simultaneously by everyone and by no one. The Street View images that I select convey the contemporary human experience in all its horror and beauty. One more important thing to note is that, in theory, we are all equally subject to being photographed. Still, after exploring Street View, one soon realizes that it is more often the poor and the marginalized who fall within the anonymous Google camera view. The Street View photographs are not as neutral as they first appear. Google has laid an imperial claim to organize the world’s information, placing the Google copyright logo on every image. The Street View project presents a world watched by the supposed detached gaze of an indifferent eye. However, like an indifferent god, Google’s cameras witness but do not act. For all Google cares, the world could be absent of moral dimension. It is up to the viewer to take a moral position vis-a-vis the photographs.

Which recording surprised you the most?

The time I found my ex-girlfriend on Google Street View. That is the only photo I have of her. This is the only time I have ever given context to one of my images since it was so personal to me. I made a short film about it.

Who travels more – your art or you?

Nine eyes that have been almost everywhere in the world. Nine eyes that capture moments and yet are free of any personal motivation.